Salisbury has a massive cathedral. It has been a place of pilgrimage for the devout for centuries. It’s also home to the Magna Carta if you’re into your history. And the city itself is not far from Stonehenge, in case you like your monuments rectangular and ancient.

But none of that was of interest to me. I went there for the Terry Pratchett exhibition. 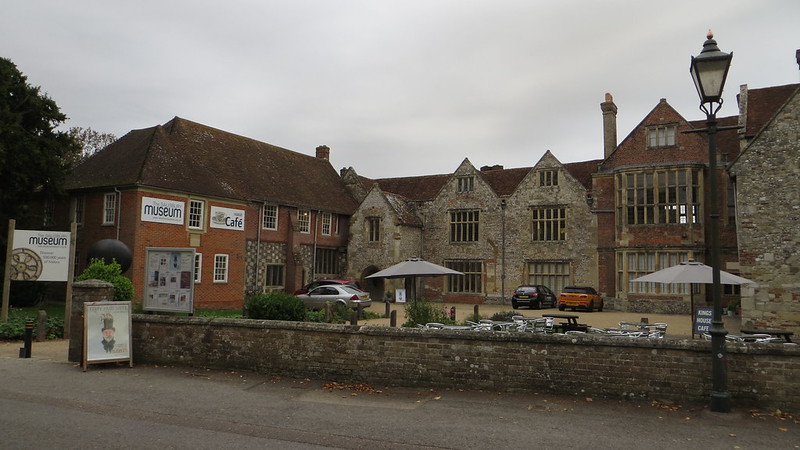 I’ve been a Terry Pratchett fan for a long time now. I’ll be honest, I even shed a tear when the good man died on the 12th of March, 2015. But more than that, his books have been an inspiration for me in my own writing, showing me how to write engaging stories where no character could ever be considered to be incidental.

So when I heard that Salisbury Museum were holding a Terry Pratchett exhibition – Salisbury was Sir Terry’s home town – I knew I had to go check it out. I also like Salisbury a lot, so was glad of the excuse to go too. 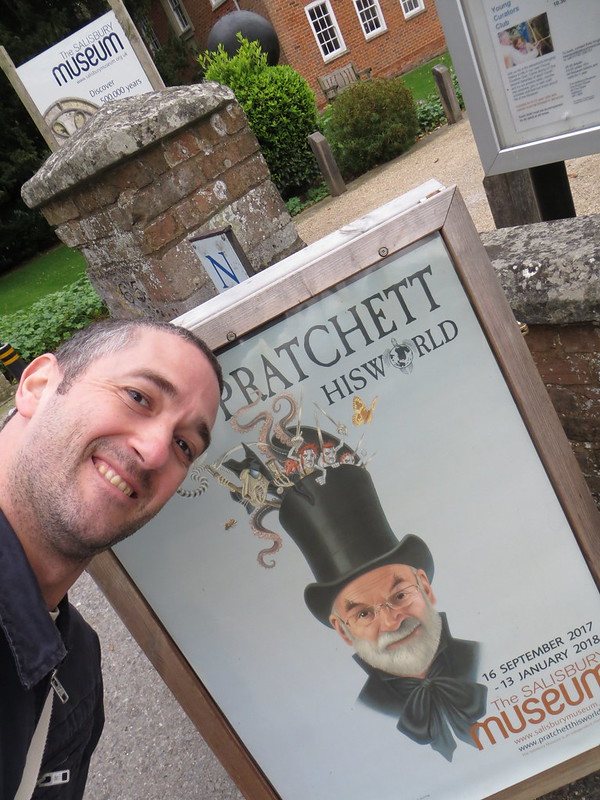 If you’re unfamiliar with the Discworld novels, they are a series of fun, funny, engaging and enlightening books that I would recommend to anyone. They are ostensibly fantasy novels, but don’t let that put you off. They are really just great stories about people going about their lives, trying to make sense of the world, a world that for them is a round disc flying through space on the backs of four giant elephants who are in turn stood on the back of a giant turtle. 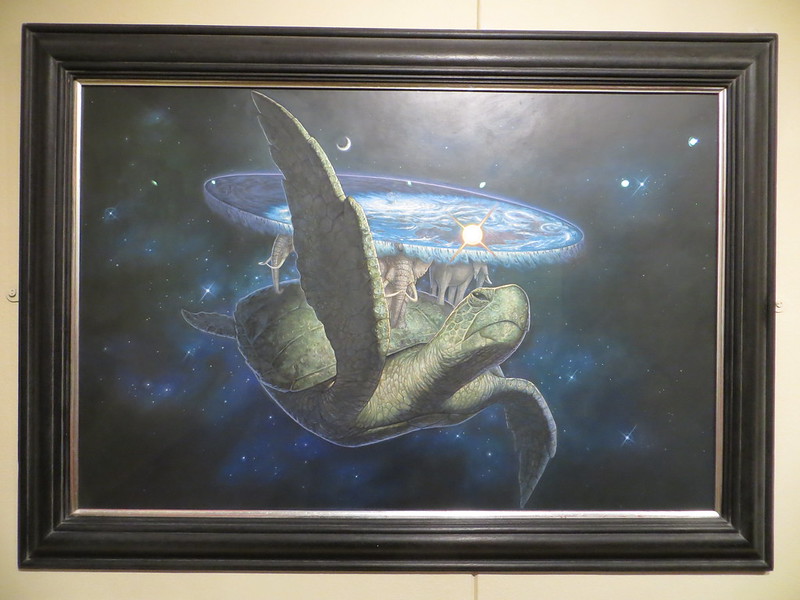 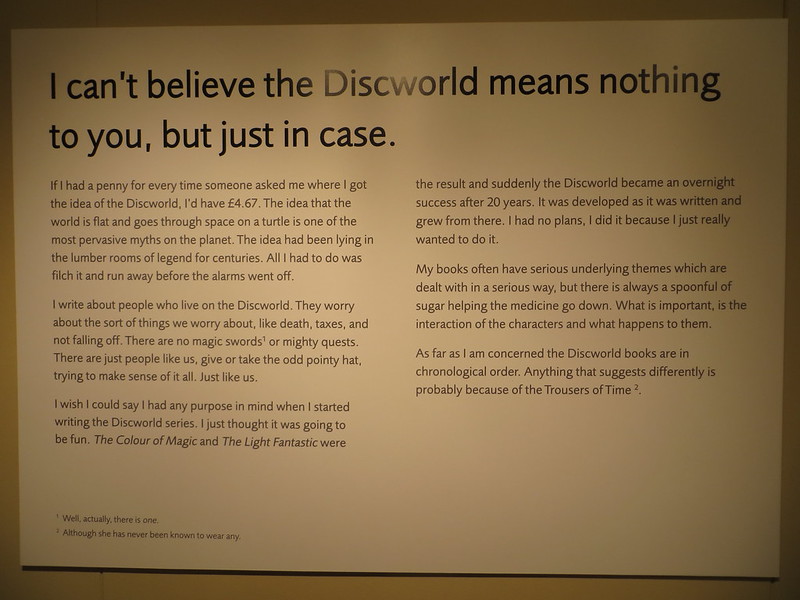 The books are great. If you don’t know them already I’d recommend giving them a go. But don’t start at the beginning. I know that’s counter-intuitive, but reading them chronologically is not necessary. And, to be honest, The Colour Of Magic isn’t the best one. For boys I’d recommend starting on Guards! Guards!, as it’s where the City watch stories begin. To me the best set of characters. For girls I’d suggest The Monstrous Regiment, a stand-alone book which is superbly written and features some strong female lead characters (something Sir Terry was particularly good at). 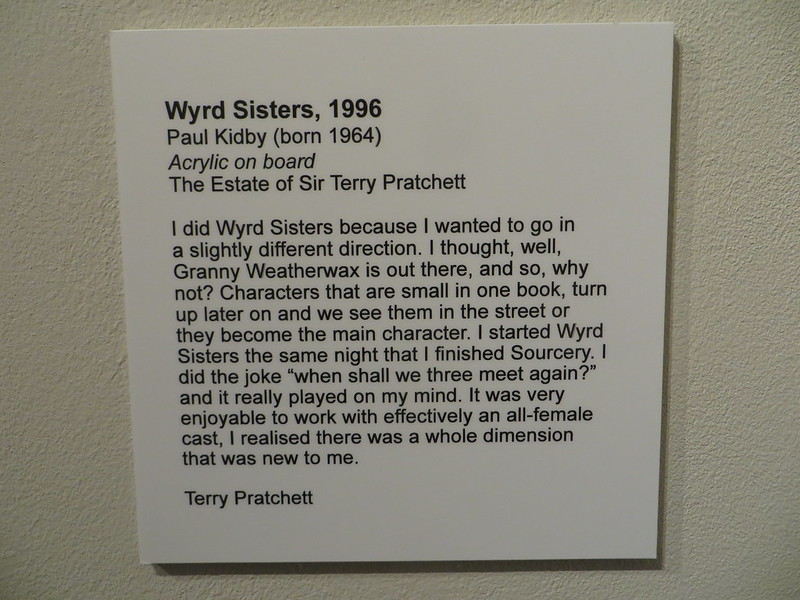 The exhibition was great. Lots of pictures by Paul Kidby, who illustrated most of the Discworld novels, 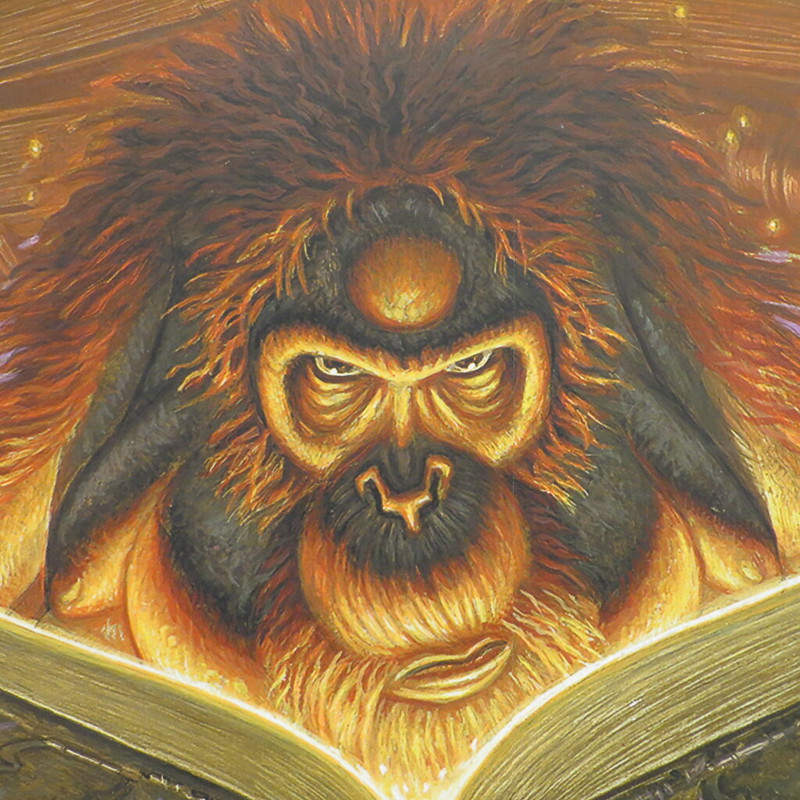 plus a great number of artifacts belonging to the man himself, that give you just a hint of his character and wit. 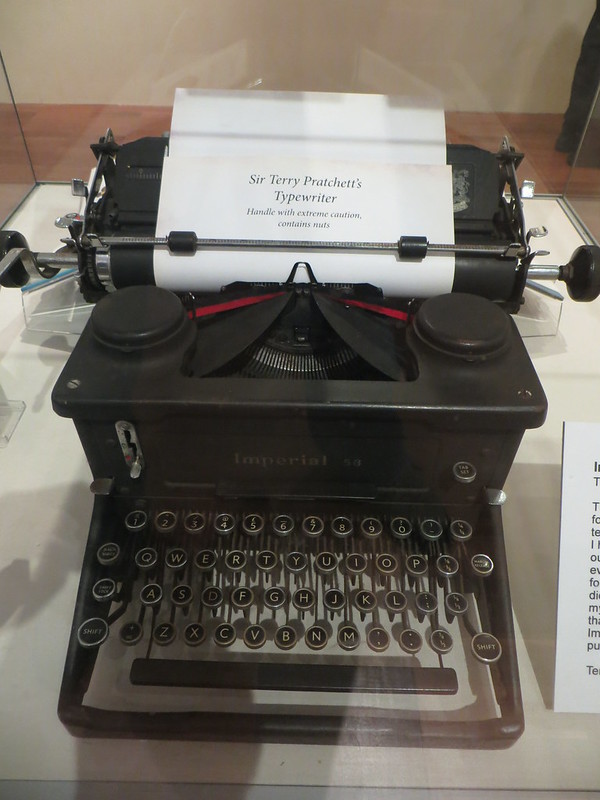 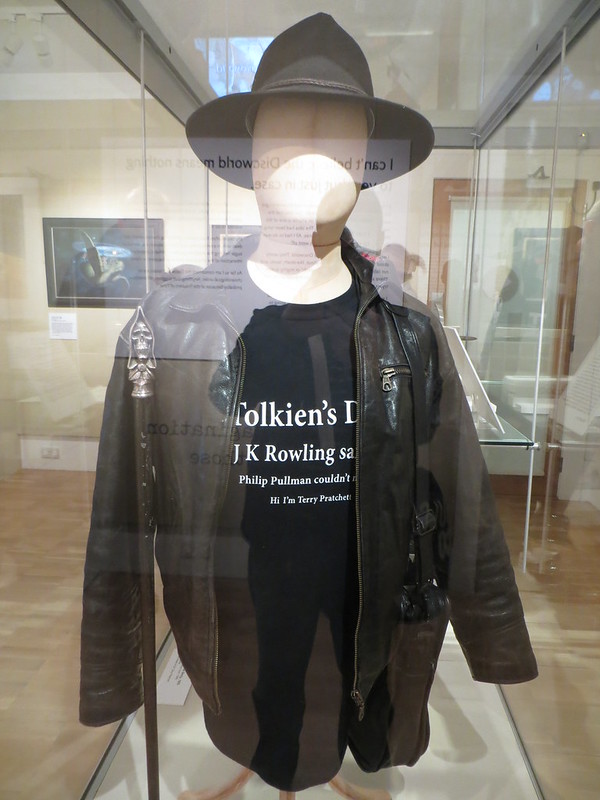 The t-shirt, which he wore to conventions, reads:

There’s a lot of love for Terry Pratchett and his work. He made you feel like a friend he had over for dinner. You’d laugh, cry, ponder and reflect together, always in a positive way, and always with tongue firmly in cheek. And at the end you’d feel like the world was a better place, if only for having someone like Sir Terry in it. I know that sounds schmaltzy but it’s true. Terry Pratchett was a friend to his readers, and they were all friends to him.

Don’t believe me? Just check out the love… 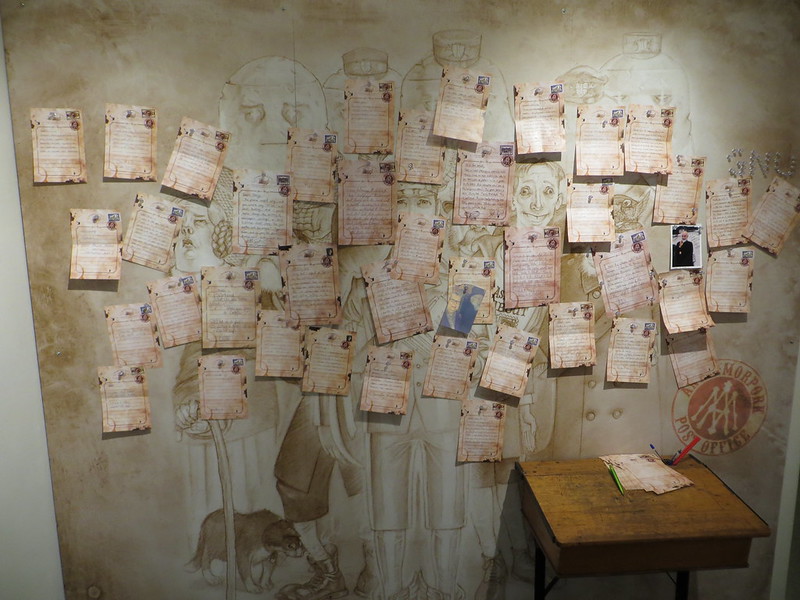 These are notes to and about Sir Terry, which the museum will pass on to his family. I wrote one too. Mine said:

They don’t all go on the wall. There wouldn’t be enough room for a start. There’s a postbox nearby where you can deposit your messages. In true discworld fashion, it has a monster living inside it. Can you see the eyes? 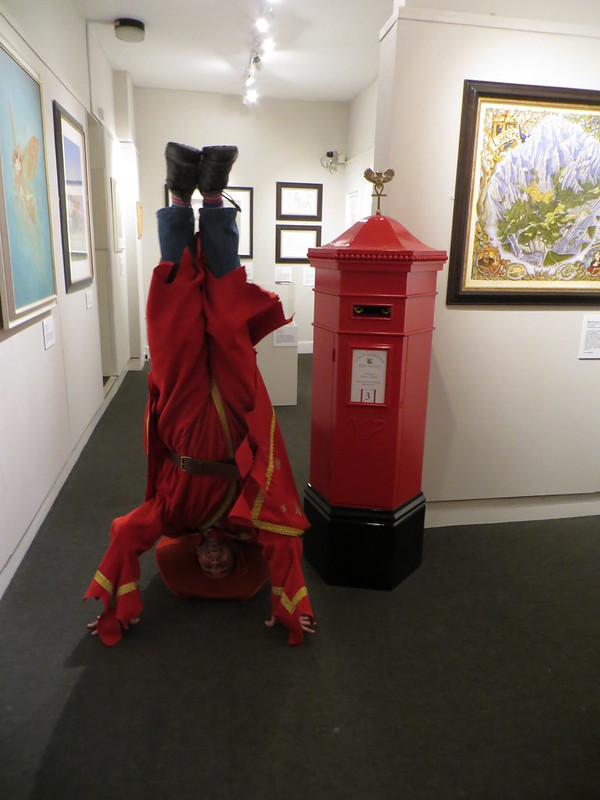 That’s me dressed as Rincewind BTW. You can do a bit of dress-up while you’re there too. The lovely staff lady who helped me do the headstand I wanted to do (below) suggested it. It’s tough doing a headstand in wizzard robes and a pointy hat, but I think I pulled it off.

My main reason for attending the exhibition was to check out the recreation of Sir Terry’s office. I wanted to get a feel for the man, and it seemed a good way to go about it. 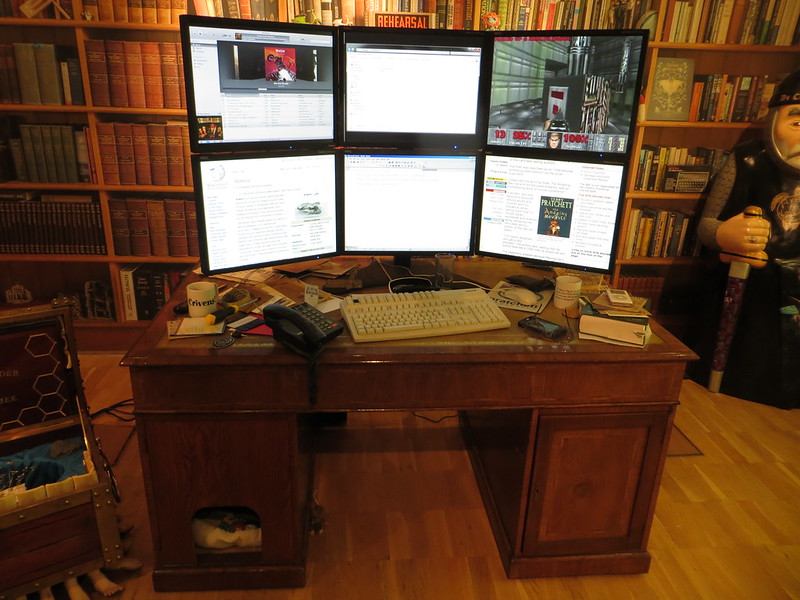 It was kinda special to see where the magic happened (or maybe didn’t, I can’t be sure. He apparently had several offices in his home, and could write in any of them), and I had to celebrate being there in the best way I know how, with a headstand. 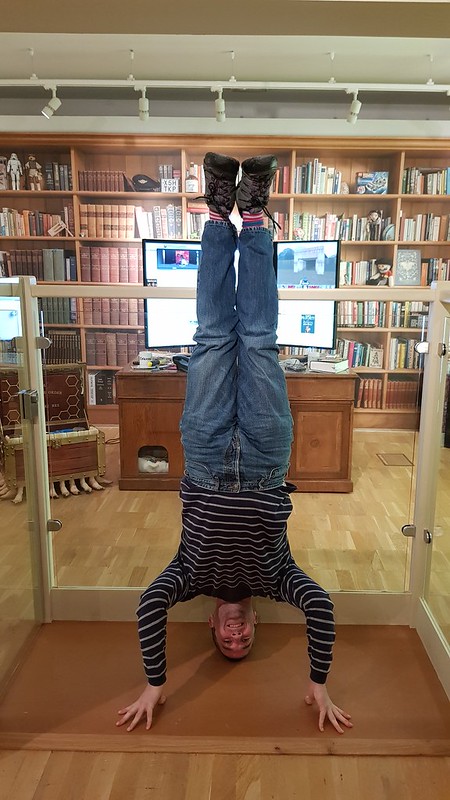 This is number eighty in the series. One day I’ll get to a hundred, but really, I’m in no rush.

I finished off my visit to Salisbury with lunch at the Cathedral Refectory. If you’re in town I thoroughly recommend it. The food is fantastic. 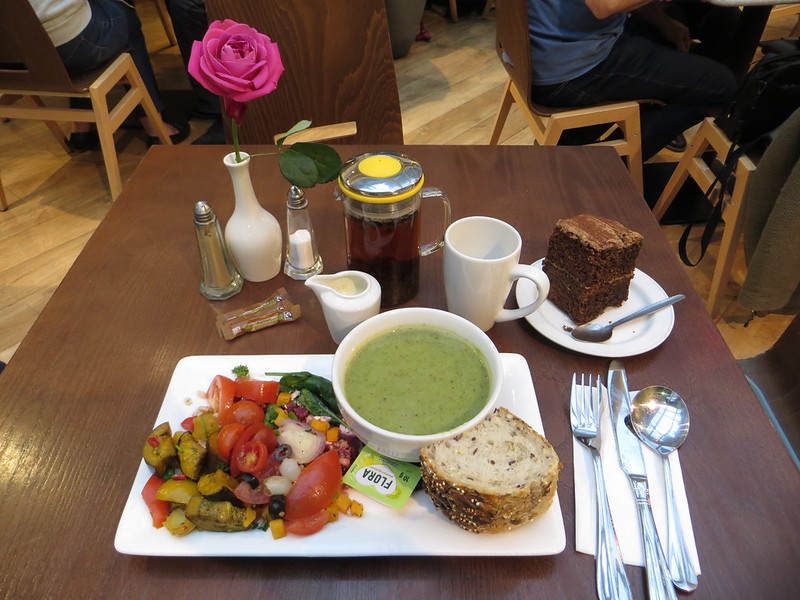 I got a lot of inspiration from my visit to the museum. It’s a great exhibition which I think everyone will enjoy, full of awesome artwork and amusing little tidbits from the man himself. In fact I’m going to conclude with one for all you aspiring authors out there. If you want to know how to be brilliant, you could a lot worse that this… 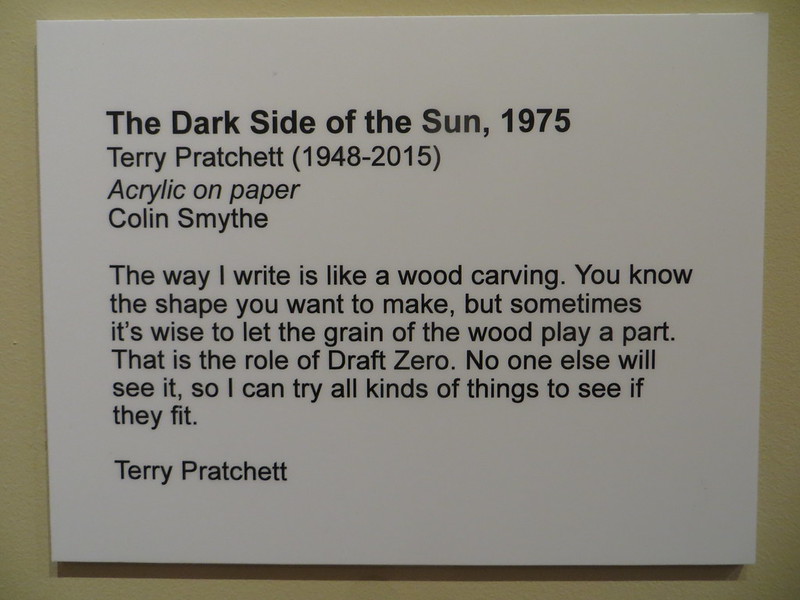 One thought on “Salisbury Pilgrimage”